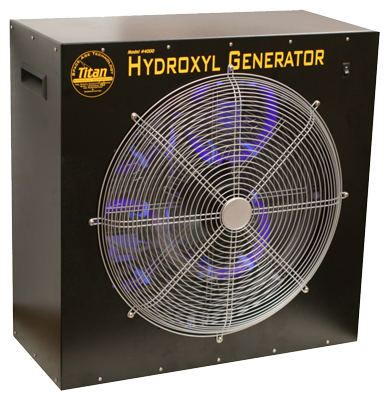 The Titan 4000 is rated for a 40,000 cu/ft treatment area when paired with the Hydroxyl Maximizer Cold Vapor Injector, which is included in this purchase.

The Titan 4000 Hydroxyl Generator is one of only a few models of true commercial hydroxyl machines on the market. Unlike other fake Hydroxyl generators that produce ozone and are not safe for occupied areas, the Titan machines utilize 365nm to 385nm UVA TiO² Coated Photocatalytic Lamps and a permanent Anatase TiO² Coated Super Reactor Screen. This reactor screen is designed to hold the maximum amount of highly reactive Nano Sized Anatase Titanium Dioxide, and as a result, electron hole pairs are formed that react with H²O and O² in the air to produce Free Electrons, Hydroxyl Radicals and Ionized Hydro-Peroxides. When these molecules are dispersed by the fan they will decompose organic and inorganic gases and air pollutants into carbon dioxide and water.

The Titan Hydroxyl Maximizer uses ultrasonic technology to produce a very fine cold water vapor. The Maximizer can be placed right behind any Titan Hydroxyl Generator and will increase the direct intake of humidity which increases the hydroxyl production. The Maximizer will make your Titan machine perform as if it is on steroids.

Do not worry about elevated humidity on the job. A very interesting discovery was found during testing of the Titan Hydroxyl Maximizer was that the Titan machines will use the extra humidity from the Maximizer and does not raise the relative humidity in the room. Once the humidity is processed by the photocatalytic process it is no longer a water molecule and instead it is broken into a single hydrogen atom and a hydroxyl molecule. When the intake humidity was measured and compared to the humidity in the exhaust, there was a 15% to 40% drop in the humidity level. The Titan Hydroxyl Maximizer will hold enough water to run for 4 to 5 days.

Save this product for later
Display prices in: USD